There’s just something about Texans and their BBQ. You just can’t really split us up, and you can’t convince that the BBQ is just as good or better anywhere other then Texas.
See, for example, tonight there will be a birthday party at my apartment for the husband and for our friend Holly. 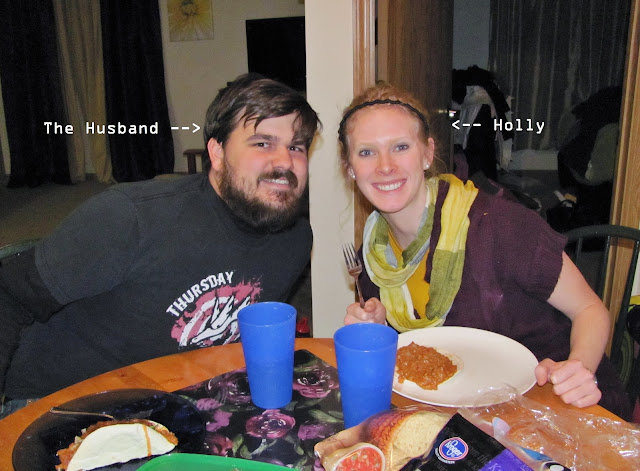 They are both April babies. His is on the 18th and hers is on the 24th (which happens to be Easter Sunday 2011, if you’re wondering). And, because I love both of them, we had to celebrate with a big party.
And because it is a special occasion, BBQ must be had. So, I emailed our friend Eddie who creates the most delicious brisket and ribs and sausage. And he mails them to boot. He FedEx’d the deliciousness to us and said it would be here Thursday. So, I rescheduled a couple of meetings and hung out at home waiting for the knock on the back door alerting me that our BBQ had arrived.
And I waited, and waited, and waited.
Then my email made it’s cheery, “You have a new message!” beep. And I looked at it was from Eddie and something to the effect of: ‘FedEx just emailed me and said you weren’t there. Just wanted to let you know. You can probably pick it up from the distribution center if you call them.’
Eff my life. I have been home!! Turns out, the note that I leave on the front door telling delivery guys to come to back was gone. So, I pulled the door tag and called the number and spoke with a lovely woman who said that I could pick up my package between 6 and 8 that evening, and wouldn’t I just have a great day! I smiled and said thank you and wiped my hands and headed to school.
Then, the husband called and we were chatting (this is around 5:30) and I said, “oh, by the way, I’ll need you to go get the BBQ tonight.” And he groaned, because he’s played with FedEx before and they just irked him.
So, he walked into the front door at 5:56 and started calling FedEx. See, Lincoln is small, but it can literally take you 45 minutes to get from one side of town to the other because there is no way past traffic lights. And he wanted to be sure it would actually be there when he was.
This resulted in talking with 4 “customer service reps” who all sounded like we were inconveniencing them. Apparently, when the husband called, he was told that the shipping place was only open two hours a day, wouldn’t have the package until late that night, and no, they can’t contact the drivers. Sorry about your bad luck, should’ve been home. This took about 45 minutes.
Finally, he somehow managed to get a hold of a Customer Advocate* named Mary. And she was truly on our side and got all the information we needed calling regional managers and a guy named Joel. She told us what I had been told earlier: The package is waiting happily for us at McCormick Dr until 8pm. And wouldn’t you know it, but the husband walked into the warehouse and they knew exactly where the package was and they smiled and told him to have a nice night.
Phone time: took an hour.
Drive time: 45 minutes.
If you’re counting, this This whole process took almost two hours and really made us decide we would never, ever ship with FedEx.
But! The brisket, and the ribs, and the sausage are sitting in our refrigerator, ready to be consumed by friends celebrating awesome lives. 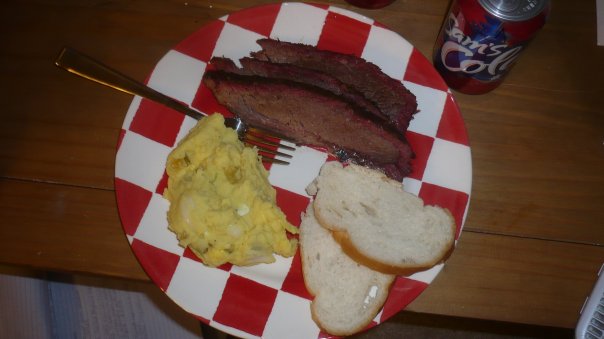 And we now know how much we will put up with to get Texas BBQ.
I have about 800 things which I want to blog about. They just keep running through my head. So that means that tonight, while I make taco soup and wait for 10:30 to come around to pick up the husband, I will be blogging and saving and getting my thoughts down.

But, for now, I want to talk about my heart. Not my literal heart in that the thing which keeps me alive (although I’m quite grateful for it). I mean my heart in the sense of what I followed onto this career path, what I listen to if I’m making good decisions, that heart.

In August of 2007, I read an article that has literally changed my life. It’s by Eve Ensler and it’s about rape in the DRC. It was published in Glamour, and I tore it out and kept it folded in my wish box for a long time.

The second I read that article I believed without a shadow of a doubt that one day I would go to the DRC and work in that hospital or with another group and work with these women whose lives have been shattered by rape. By rape in a way which we can’t fathom and don’t want to. These women are amazing, and I want to know their stories.

I told my husband (who was my boyfriend, at the time) about this. He was not pleased. And still isn’t. My husband wants me to have nothing to do with the DRC. He says this out of a his concern for my safety, not because he doesn’t want me to follow my heart (we moved to Nebraska for goodness sake’s. He’s all about me following my dreams.) And I believe him. But I just can’t turn it off.
Recently, I started reading a blog called The King Effect. And, it’s amazing. It’s a woman who decided to move to the DRC to do something about what was going on.
And I want to be her.

I’m looking into Fulbrights. As a graduate students certain parts of the world are more open to me than undergrads. I’m going to the DRC one day to work with these amazing people. I promise.

Photos of her time in the DRC can be seen here: https://picasaweb.google.com/amy.ernst114

Isn’t that just a cool proposal? I fell in love with it the second I pressed play.

Have I told you guys about how the husband proposed to me?

It was October 2008. We had just spent a week in San Diego where I just knew, I KNEW, that he was going to pop the question. We even did a sunset cruise with champagne (ahem, neither of us was old enough to drink, legally at least). Alas, we made it back to Texas and I was sorely lacking a fiance. I had a great boyfriend, but the fiance was seeming elusive.

Needless to say, I came home a bit perturbed and feeling like he didn’t love me and, never loved me, and would never love me enough to propose. I believe I even said as much to him. Oh the pity party.

And when I throw myself a pity party, I go all out. Poor guy.

Around 11, he asked me if I wanted to sit outside and look at the stars. Not an uncommon request, but I was pissed. See, the pity parties always last too long and end up with me just being annoyed and angry. You would think I would learn.

Regardless, I got dressed grabbed a blanket and we went outside. We were sitting down, talking and looking at the stars when I felt him shift a bit. I looked over at him and he said, “So, are you sure that you want to spend the rest of your life with me?”

I looked at him and said “Well, of course.”

My stomach started fluttering as he pulled out the ring and asked me to be his wife. And, internet, it was lovely. The proposal was so us, low key and quiet. And the ring. Oh my but that ring.

I don’t actually know who he is, but I think he’s the athletic director of UNL.

Just wikipedia’d him. (I made that word up, by the way. I think it should catch on).

Anyway, he sent an email out to all of the students about the big game on Saturday. Big game? What big game? Ooooh, dear internets. I will tell you.

It’s a big game because last year, UNL almost, almost, almost by {} that much beat Texas. But Texas was sad and demanded their “fake” second back on the clock and beat UNL. No, I don’t choose sides and that is all completely factual.

It’s also a HUGE game because this is the last time that UT and UNL will play each other, since UNL opted to pack their (our) bags and head on up to a different conference. So it’s big. Oh, and we apparently have a shot at winning, sooooo there.

Anyway, there has been a lot of trash talking on both sides. A LOT.

Saturday’s game is a great opportunity for each of us to display the pride we have for Nebraska football. As an integral part of our team, we need your support to give us the best home field-advantage possible. We hope you will blanket the stadium in red, be loud and support your Huskers. Equally important, however, is providing evidence to support Nebraskans’ reputation for treating our opponents well. Please be courteous, responsible and respectful of your neighbors and all players, coaches and fans. Only positive comments are appropriate in both word and print. Let?s enjoy a great game and show our Husker pride through respectful behavior.

Okay. Really. How awesome is that? Because, as a lovely Texas Native, I can tell you that I take serious offense to some of the stuff that’s been spouted off my these insane UNL fans. So, I just think it’s fantastic.

As for me, I shall be wearing this shirt: 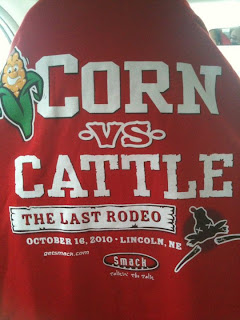 The back reads: You’re Ugly and Your Mama Dresses you in Burnt Orange. I wonder if that’s okay with Tom Osborne?

And I’ll be joining in the chants: Goooooo Biiiiiiiig Reeeeeed! Go Big Red!

Then, I will eat dinner with a good friend who writes for the Daily Texan.

In a graduate student world, an assistanship is like the Holy Grail.

An assistantship pays for all of my tuition (except the fees, like library, computer usage, etc), covers 95% of my health insurcance, and finally, the pièce de résistance is that I also get paid xx a month. And all I have to do is work a few hours a week.

Now, these assistantships come in two forms, full time and half time. This doesn’t make any sense to me because assistantships are 20 hours or 13 hours a week. I can get behind the 20 hours being full time, especially when you consider classes and clients and such.

So, I am rechristening my assistanstship (which is half time) to “Baker’s Dozen Hours.”