It’s Tuesday night.
In our household, that means Art night. We roll up our carpet and sit on the floor. I pull out a sketch pad, or my Chinese paints, or anything else. The mister pulls out the stuff he’s working on, and we just let ourselves be creative. The cat might join us or not. We put records on and pull out wine or beer, or $1 sodas from McDonald’s. 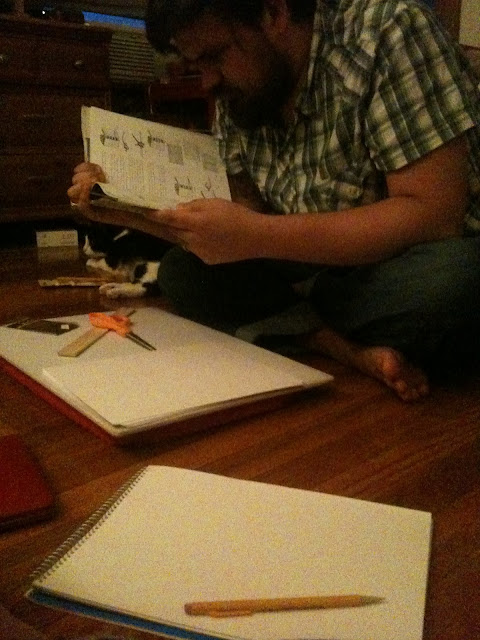 The mister and I both want to be creative.
Both of us never felt like we were creative. Never felt like artists. My parents always, always kept my art projects, but I  never felt like they were good enough. And after, one day, having my stuff laughed at, I stopped being creative (don’t we all have a story like this?) The mister has a younger brother who is an incredible artist. He’s amazing. And because of his amazing-ness, the mister always felt like he couldn’t compare, and so he stopped doodling.
A couple of weeks ago, we decided screw it and chose Tuesday nights to let our creative juices flow.
So, on Tuesdays, if you needs us, that’s where we’ll be. On the floor being creative. And not judging each other on our creativity.
Tonight, I ended sessions with two of my clients. One who I had been seeing for 21 weeks and the other I had been seeing for 19 weeks. This was cause for sadness and some tears. There’s also happiness because I know there will be great things for these folks. However, the sadness was definitely palpable.
So, my husband, who is awesome, brought me a (half priced!) banana split.
Proof: 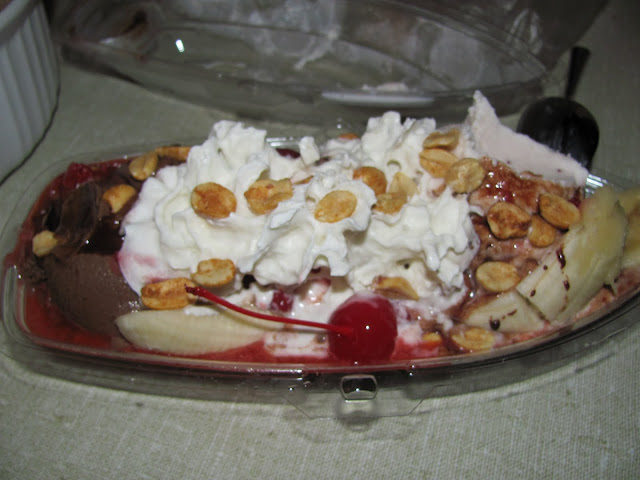 So, here’s to you husband. You are awesome and loved.
And appreciated. 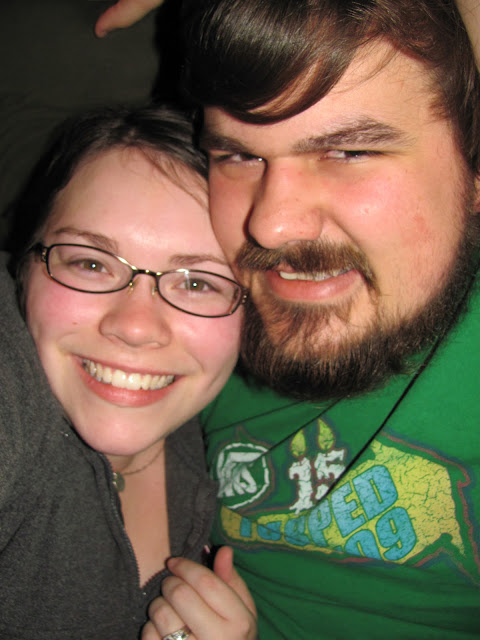 See this handsome guy?
That’s my husband.
He’s this awesome guy who has great taste in beer, as well as beer morals.
He sings and dances while doing dishes.
The first thing he wants to do, after we’ve been apart all day, is pull me into a bear hug.
He cleans the bathroom, and I normally only have to ask him once.
He humors me with my crazy home improvement/craft ideas. (e.g., I sent him a text this morning which read: “I want to pull the cabinets out above the sink so that we can hang a dish rack. The hardest part would be removing tile.”
He moved to Nebraska so that I could get my Ph.D.
He is the best kisser.
He taught me to eat my vegetables.
He can create a mean stir fry.
And today is his birthday.
I love you husband! I am so proud to be your wife. Thank you for being so fantastic.

For a while, I wanted to own a home. I wanted to buy house so that the husband and I would have something which was ours. When we paid our monthly payment, it wasn’t just going to a company. Nor would it feel like we were throwing money out because we would be paying a mortgage, which would mean that in the end we would own something rather than not keeping anything. It’s kind of like the difference between leasing a car and buying a car – with one you own it and with the other you have to give it back.

The other reason I wanted to own a home was because I would be allowed to do things to said home and no one could tell me otherwise. I could paint, I could garden, I could put as many holes in the walls as I wanted because it was my own. I could try different things over and over because it’s mine and I don’t have to get clearance with a landlord.

I also want to say that I hate corporate apartments. They feel sterile. You can’t add color and I’ve found that they are difficult to make them feel homey. No matter how many lamps I bought, I’ve never felt comfortable in a corporate owned place.

Last year, when we knew we had to find somewhere else to live otherwise we would be homeless, we started hunting Craigslist. That’s where apartments are listed here, especially ones downtown. I wanted to find a house to rent, because by God, if I couldn’t buy one we would rent one.

The one I wanted fell through. We could never get a hold of the company to show it to us and then it was rented. The next place we looked at I fell in love with. It was teeny apartment, maybe 500sqft, but it had a sense of home and a sense of community. The guy who managed the apartments lived on site and he was just awesome. You could tell he loved his tenants and he cared about the place. He would also allow you to paint and do whatever you wanted. Plus cable was free.

The husband wasn’t a fan. It was a very small apartment with an unbelievably small kitchen. It had a mini-stove, and the husband was not going for it. We turned him down. Finally, we decided to contact this place that only ever listed studios hoping we would find something we liked.

The first apartment we saw in this complex was a gorgeous one bedroom, third floor walk up. It had a claw foot tub, stained glass windows, a beautiful murphy bed, a dressing area and best of all a farm sink.

The next apartment we looked at about a month later was a one bedroom under construction. The only redeeming quality it had was a gigantic kitchen with two sinks and built in booth seating. The husband didn’t like that one either. That was okay because I wasn’t sold either. As we were leaving, the owner said, “Well, I have another apartment that just opened up. It’s a two bedroom first floor. The people who lived there before really didn’t take care of it…” We thought, what the hell, and walked with her to go look at it.

Today, I paid month 12 of our rent and we’re getting ready to sign a two year lease. 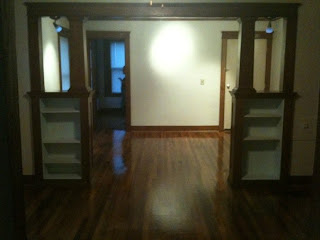 12 months later, I have made that apartment home. We’ve painted, and hung pictures, wine holders, hooks, and curtains. We’ve bought a dining room set, found a papasan chair, and built shelves. We’ve downsized and have learned to cook meals for 10+ people in a galley kitchen. We hung plastic to keep the cold out and used Window ACs to cool us down.

I can’t wait to show y’all. 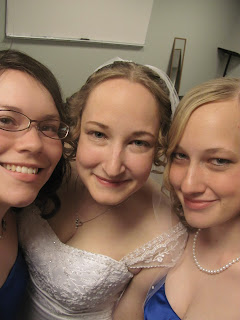 At this time last week, I was getting ready to take pictures with Lindsey who is one of my nearest and dearest friends. We’ve known each other for 10ish years now, and she’s one of those people who has just always had my back. She’s always just accepted me for whatever I was and am with no questions asked. She has just loved me. And I am forever grateful for that.
But! On March 11th, she married her best friend Bryce. Basically, I just want to show you pictures and talk about it, because I can. 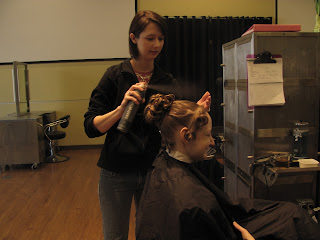 Lindsey gifted each of her bridesmaids hair dos from a salon, which was awesome. It meant that we didn’t have to do it ourselves, which I totally appreciated. My hair is at an awkward length and I don’t know what the heck to do with it, so I was grateful.
Lindsey did a gorgeous updo with lots of curls and a ponytail thing. Her hair is baby fine thin hair — it’s gorgeous but requires liquid cement and bobby pins to keep it up. But, it stayed which is what matters. 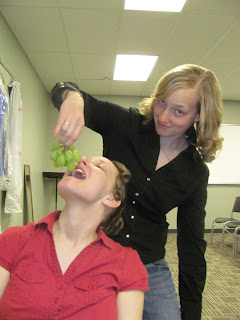 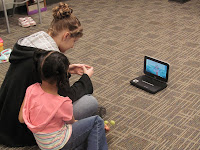 We had a constant stream of food which was also awesome. However, while I was putting on Lindsey’s nails, I wouldn’t let her eat. So, the Maid of Honor (Jessica) stepped up and did her duty of feeding the bride. Someone had to do it.
Lindsey also used Cinderella as a way to hang out and wait while I did Jessica’s make-up. We were sequestered to this back room and there wasn’t a whole lot to do. But singing mice seems to handle her nerves (which were already pretty non-existent). 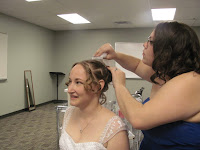 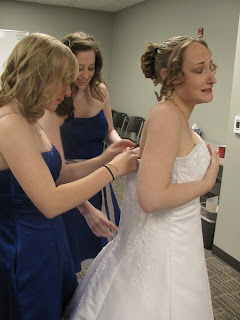 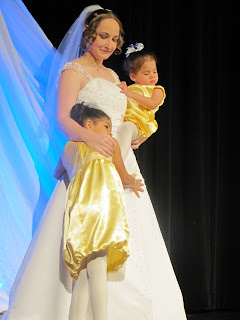 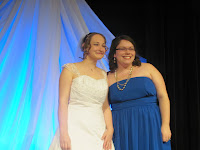 After I finished all of our make up, it was time for Lindsey to put on her gorgeous white dress. There was some whining about cold hands and a hug in the middle, but we got it on. And then I got to put her veil in her hair which was so cool. And she looked gorgeous.
Then it was time for the posed professional photos. Lindsey and Bryce opted to not do a First Look, so there was a lot of wheedling to keep them from seeing each other. Thanks to a really, really intense and scary wedding coordinator, there was absolutely no chance of that happening. 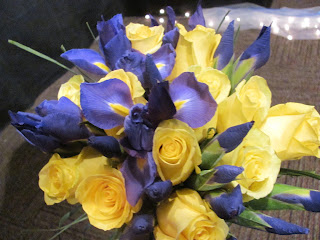 And then it was 7pm and it was time for Lindsey to marry her love. The night before, I about lost it when I watched her rehearsing. I mean, really. And I was no better when we were standing waiting outside. I saw her dad, who I have always called Mr. Smith, waiting to walk his daughter down the aisle and I thought, “Oh my God…. I don’t know if I can not cry during this…” 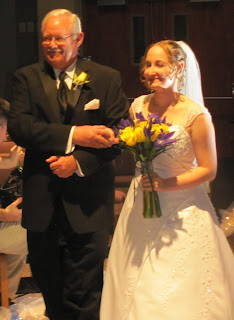 And I barely did it. He walked her down the aisle and put her hand in Bryce’s and it was beautiful. And I was so, so happy for her. 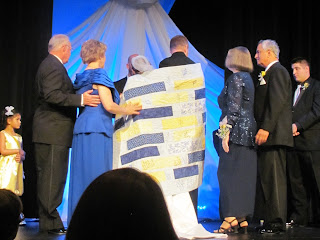 The next moment where I was about positive that I would lose it was when they were wrapped in a quilt. See, I made that quilt. And the husband and I did a quilt wrapping in our wedding ceremony. What is that saying, the best form of flattery is copying? Something like that. And that’s totally how I felt.
Everyone will be pleased to know that I didn’t cry. My chin wobbled, but I wasn’t that bawling bridesmaid, which is probably good. 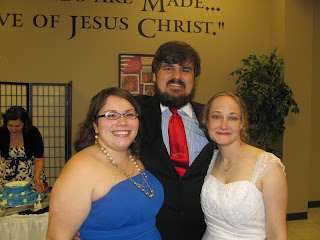 After they got married, there was an awesome dessert reception with ice cream sundaes, delicious juices, fruit and cheese. It was tasty and fun. And then of course there were awesome wedding cakes. Lindsey surprised Bryce with an Xbox 360 Cake and she had a beautiful star cake that a friend made for her. 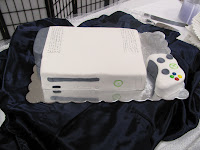 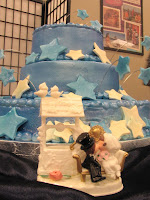 It was all so very beautiful and I feel so lucky to have been a part of it.
I wish Bryce and Lindsey nothing but all the happiness in the world.